Food ★ Ball is the exciting new 60-minute TV show featuring teens with less than one day of cooking camp training.  The two teams of inexperienced teen chefs then go head-to-head on the kitchen gridiron battlefield. 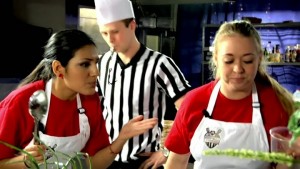 Team Red on the gridiron.

The teams race against each other and against the clock to serve up two challenging, healthy courses for a panel of expert judges: Jon-Paul Hutchins, Hayley Gibbons and Gabriel Garfio.

The action is frantic. The contestants are frazzled. The result is pure fun! Under the watchful eye of the Chef Ref, teams try to avoid costly penalties while also contending with kickers, scrambles, audibles, safeties and more. Will the result be a touchdown of taste…or a fumble of failure?

Catch Food ★ Ball Saturdays at 4PM on AZ TV 7 and Cable 13 throughout the state of Arizona!